The Eastern Plaguelands were once a series of farmlands, and villages on the road to the bustling city of Stratholme. During the Third War however, the region suffered catastrophic blows, first with Arthas' slaughter of the citizens of Stratholme, and then with the arrival of the Scourge. The Scourge killed nearly all the inhabitants who had not already fled, culminating at the terrible Battle of Darrowshire. Now the region is roamed only by mutant creatures, the soldiers of the Scourge, and members of the Scarlet Crusade. Only a small camp maintained by the Argent Dawn remains. 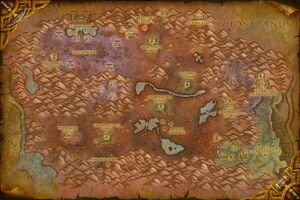 The Champion line begins with Sylvanas in the Royal Quarter in the Undercity. She sends you to Nathanos Blightcaller in the Eastern Plaguelands. He can be found at Marris Stead, a small ridge straight ahead as you enter the zone from Western Plaguelands.

The Darrowshire line begins at Sister Pamela in Winterspring, in the neutral goblin town Everlook. Some of the continuity is sketchy, but it basically splits into two quests lines which you do in parallel, both of which must be done to get the final quest.

If both (*) above completed, then the following sequence can be done.