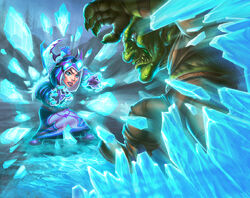 Mages (or Magi) wield the elements of fire, frost, and the arcane to destroy or neutralize their enemies. They are a robed class that excels at dealing massive damage from afar, casting elemental bolts at a single target, or raining destruction down upon their enemies in a wide area of effect. Mages can also augment their allies' spell-casting powers, summon food or drink to restore their friends, and even travel across the world in an instant by opening arcane portals to distant lands.

When seeking someone to introduce monsters to a world of pain, the Mage is a good choice. With their elemental and arcane attacks, it's a safe bet something they can do won't be resisted by your chosen enemy. Damage is the name of the Mage game, and they do it well. Their arsenal includes some powerful crowd control spells, also, giving them the ability to keep hordes at bay -- in fact, these abilities can be used on the most common creatures in the game, thus making them extremely valuable for this purpose.