Sentinel Hill is the main settlement in this region. It has many subquests that culminate in a large instanced dungeon called "The Deadmines" where you must find and kill Edwin VanCleef, the leader of the Defias Brotherhood. The entrance to the Deadmines is located in Moonbrook, a broken town controlled by the Defias Brotherhood in the south-west region of Westfall, near The Dagger Hills.

Dropped items in this area and their purpose:

Quests which take place outside Westfall are denoted by a

Quests which are part of a chain are denoted by

. Click the downward arrow to the right of the icon to view the chain. 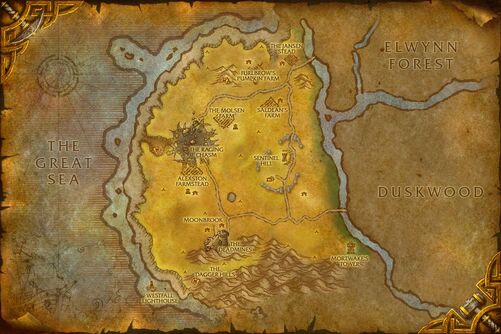 The following quest chains occur in Westfall. Chains have been included if they are more than three quests long or are specially significant in some way.

The Westfall Quartermaster, Lewis, needs some gear from Stormwind.

This long chain sends you to the Redridge Mountains and to Stormwind City. The final steps send you into the Deadmines instance.

The Ghost of Captain Sanders has a treasure map for you!

Grimbooze Thunderbrew sends you off in many directions, fetching Holy Water from Stranglethorn, Barley from the Swamp of Sorrows, Corn from Tanaris, Rye from the Hinterlands, a Sycamore branch from Feralas, and wood from the Searing Gorge. The reward is Thunderbrew's Boot Flask, possibly your first trinket.